More than seven years after the Golden State Warriors announced they were building a new home, Chase Center opened its doors to an excited crowd in September 2019. Theatre Projects worked with MANICA Architecture, Kendall/Heaton Associates and Gensler to design this new facility to be more than a new home for the NBA Championship-winning team—it’s also a one-stop premier sports and entertainment destination in San Francisco’s Mission Bay neighborhood.

The first event in the new 16,000-seat stadium was a sold-out concert where Metallica shared the stage with the San Francisco Symphony. This concert showcased the arena’s capabilities—and it didn’t disappoint! The concert stage was placed in the round, so the audience wrapped around the performers on all sides, making the room feel intimate, animated, and full of life. And to make the audience feel even closer to the action, several circular video displays and speakers were hung from the ceiling directly above the stage, using a unique mechanized gantry system devised and designed by Theatre Projects.

“Most major arenas have a retractable score board hung over center court. When it’s retracted, there’s a gap in access to the roof steel that you’d typically rig from, requiring complex rigging solutions and potential design compromises,” explains theatre equipment designer Michael Nishball. “At Chase Center, the scoreboard runs the entire length of the court, from rim to rim, so there’s an even larger gap in access to the roof steel—meaning the main performance area for non-sporting events would have extremely limited rigging options. So, we designed a gantry system that tracks under the scoreboard once it’s retracted, filling in that gap in the roof steel. It works just like a gridiron so riggers can safely work overhead while technicians are preparing the floor below, saving the client significant time and labor costs, and giving the artists full creative potential of the space. It’s absolutely a game changer!”

And while the arena is equipped to host basketball, large-scale events, and arena concerts, the Warriors also wanted to be able to accommodate live events for smaller audiences. To meet this need, the design team devised another innovative solution to create the “Small Theatre”—a sectioned-off part of the arena that creates a proscenium-style theatre within the room. This “Small Theatre,” scheduled to be completed in 2020, will create an elegant setting for live music, award shows, and theatrical performances.

Theatre Projects suggested changing the room’s orientation for these smaller-scale performances to take advantage of the VIP seating along the long edge of the room, bringing audiences much closer to the stage to improve their viewing experience. Highly finished walls containing LED displays, banners, and architectural lighting will be deployed to create the enclosing side walls. Then, a portable stage and full proscenium will be suspended in place to create a 5,000-seat theatre, while performance lighting and audiovisual equipment will be rigged above the stage using the overhead gantries designed by Theatre Projects. Audience members who attend performances at this space will enter the building from a dedicated, separate theatre entrance and experience a much smaller, more tailored lobby area, which will feel more enclosed and personalized than the large concourse serving visitors on game days.

Chase Center hosted its first Warriors basketball game on October 5, and since then has hosted numerous stand-out performances from the likes of Santana, the Jonas Brothers, and Janet Jackson. While 60 event dates are reserved for Golden State Warrior games, Chase Center also plans to host almost 150 other events a year, reinforcing the original vision for the venue as being not only the home for a first-class basketball team, but also a world-class venue for entertainment, and a state-of-the-art venue for all of the Bay Area to enjoy. 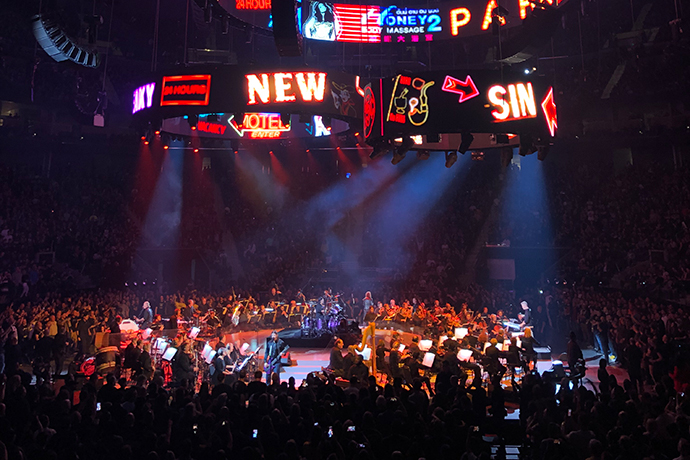