El Teatro is an extraordinarily beautiful, one-of-a-kind theatre. Originally designed to instill a love of literature and the arts in children, you enter a world of fantasy and fairy tales the moment you step inside this 1920s auditorium. Giant wall murals depict key scenes from classic children’s stories—the Big Bad Wolf approaching Little Red Riding Hood in the woods, Cinderella losing her glass slipper as she hurriedly leaves the ball, and Jack climbing up the beanstalk, to name a few. But the illustrations adorning the room are just part of its enduring charm. With gorgeous stained-glass roundels in the ceiling, pennant-like valances over doorways, and castle-shaped chandeliers near the proscenium arch, the auditorium is a natural setting for storytelling, a place where imaginations can take flight.

Today, the theatre does much more than presenting beloved children’s fairy tales—it’s a hard-working community space with programming that ranges from lectures and screenings to community gatherings and theatrical performances. After decades of continual use, it was time to freshen up the space, restore the original mural artwork and decorative plaster, remodel key areas, and upgrade technical systems to meet modern performance needs. And it’s fair to say, this renovation brought out the inner child in us.

We relished the opportunity to restore such a treasured historic space and add discreet modern touches to enhance its performance environment and functionality. We worked with Katz Architecture to design a new orchestra pit lift and modernized the technical systems to meet the needs for the diverse programming in the space—we upgraded the house lighting controls and performance lighting dimming system, while also improving the audiovisual systems to make sure the room could cope with the modern-day technological requirements for lectures and screenings.

And one of the biggest surprises of all? This hidden gem is located where you might least expect it—on Fifth Avenue, in New York’s Museum Mile. The theatre adjoins El Museo del Barrio, the country’s oldest museum devoted to Latino art. It was independent of the museum until 1988, producing free shows for orphans and sick children, supported by the nonprofit Heckscher Foundation for Children. Since El Museo took over operations, the theatre has been used to complement the museum’s exhibitions, bilingual education activities, and public programs. And in doing so, it’s become an integral part of Latino history and legacy within the New York cultural landscape.

And while the museum celebrates its 50th anniversary, the theatre can celebrate almost 100 years of inspiring its local community. Long may it continue! 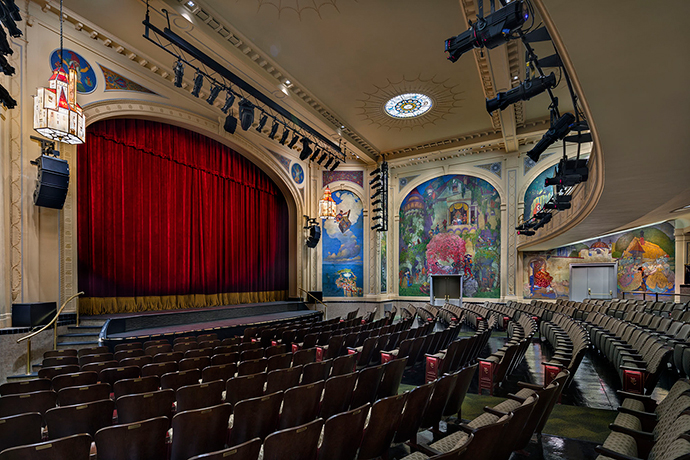