In 2008, when the Iowa River flooded and destroyed Hancher Auditorium and 12 other buildings at the University of Iowa, the loss to the community was far greater than the physical loss of those structures. Hancher Auditorium was one of the most popular venues for touring groups in the region, and the flood forced the student and traveling groups that normally used the venue to move into nearby facilities. But this week, with the grand opening of the new Hancher Auditorium, the University of Iowa and the people of Iowa City once again have a magnetic cultural center to call their own. Looking up at the stunning steel and glass facility, they’ll see that the university has bounced back from the devastating flood. They not only rebuilt and pushed forward, but also thrived in the face of adversity.

Only months after the flood, Theatre Projects began working with the university to determine how they would recover, rebuild, and move forward—not only regarding the 40-plus-year-old Hancher Auditorium, but also the Voxman School of Music and Clapp Recital Hall, which were attached to auditorium.

Working with the university and Hancher staff, Theatre Projects conducted a series of studies to sketch out a path forward. It was determined that Hancher Auditorium would be demolished and in its place, a new auditorium would be built. As the project progressed, Theatre Projects joined a team that included Pelli Clarke Pelli Architects (design architect), OPN Architects (executive architect), Kirkegaard Associates (acoustician), and Threshold Acoustics (A/V designer) to design and build a new facility. The design team moved the new building to the 500-year floodplain and determined that the School of Music would be separated from the facility cluster and moved across campus. After eight years, the university’s vision of a resurrected Hancher has taken shape—the University of Iowa and the entire region once again have a cultural cornerstone in the new $132 million Hancher Auditorium. A beloved facility has not only been reborn, it has been reinvented and modernized, providing a venue that is more adaptable, accessible, versatile, and comfortable than its predecessor.

Inside the new 192,000-square-foot facility, many of the elements that made the old Hancher Auditorium one of the most popular touring houses in the Midwest and a cherished venue for student performances have been retained. At the same time, the venue has been updated with modern amenities, mechanized theatre systems, and state-of-the-art audio and video equipment.

Our project manager, Millie Dixon, who was formerly a technical director at Hancher Auditorium, said, “The project was all about trying to accommodate spaces appropriately. We had to give them everything they wanted in pre-approved square footage. The team was very clever in navigating the government rules, rearranging things so they fit into an awkward space, and being flexible in every aspect of our approach.”

A more intimate audience-performer dynamic was achieved in the $132 million facility, in part by reducing the seat count from 2,200 to 1,765. That intimate connection was aided by developing new seating configurations that rejected the use of vast expanses of unbroken, unstaggered seating rows that were a regrettable hallmark of the original, late-1960s design.

In the previous Hancher Auditorium, the seat count was reduced in stages over the building’s 46 years. The original seat count of 2,700 was narrowed to 2,500 in the venue’s second decade and finally reduced to 2,200 during a 1995 renovation.

“The old Hancher was a building that people adored,” Millie said. “But no one wanted to recreate it exactly. If we could borrow from its high points and navigate the hurdles of FEMA requirements, we knew we could create an incredible venue with even more capability, more comfort, and a better audience experience than they ever had before.”

For all its success and the public’s adoration for it, the previous Hancher Auditorium was not known for having a robust complement of support spaces. Understanding the building’s shortcomings, the design team created highly versatile and navigable front and back of house spaces. The backstage spaces now include ample storage areas including designated orchestra shell storage, added and repositioned dressing rooms, a reception room, and a performers’ lounge. In addition, the auditorium now features a scenery transfer space, which allows for better movement of props and equipment through the building.

The new Hancher, much like the old, has been built to accommodate a heavy rotation and huge variety of performances—ballet, modern dance, opera, touring Broadway and live music acts, student choral and symphonic groups, and university ceremonies. To handle an incredible pace and variety of acts, the stage and auditorium needed to be versatile, flexible, robust, and easy to use. Theatre Projects and the design team outfitted the auditorium with a number of adjustable acoustic devices to suit each type of performance, including curtain and banners, a tracking panel, and specialty, curved acoustic tracking panels.

The new auditorium also features a number of new mechanized systems that will make moving seating, sets, and performers much easier. The auditorium features an orchestra pit with two motorized forestage extensions, and the lift-assisted house mix position can be lowered beneath the floor and swapped with a seating wagon.

The adjustability of the auditorium’s lifts not only provides versatility and ease of movement, but they can also make the venue a more accessible space. According to Millie, one requirement of the project was that any student should be able to gain access to the stage from the auditorium then cross and exit the stage. Meeting this condition, Theatre Projects designed side seating boxes which were built on mechanically assisted platforms that can lower to audience level, allowing persons in wheelchairs easy access to the stage.

The Hancher Auditorium stage was equipped with a full fly tower, 120 counterweight linesets, six mechanized line sets, and five portable motor assist winches, which can be attached to any of the manual line sets to motorize them. Although the auditorium opened with only five of the portable winches, Theatre Projects kept Hancher’s potential for growth in mind, and equipped the system’s infrastructure with the ability to handle as many as 15.

Theatre Projects designed the room, keeping in mind the near-constant use the auditorium would have to withstand by touring and student groups. Even small design touches accounted for the facility’s impressive schedule, like a set of trolley beams in the forestage grid. The beams allow the user to slide away, rather than remove, the auditorium’s speaker clusters to accommodate those of touring shows, saving time, money, and labor. Much more than just a roadhouse, the new building is also the largest performance venue for the University of Iowa’s music and dance students, and it will play host to countless student performances and university events. The building features support spaces including administrative offices, a costume and scene shop, and a rehearsal hall.

“The new Hancher is a beautiful venue, and not just because it overlooks the Iowa River and a picturesque campus,” Scott Crossfield, theatre designer, said. “From the three-story lobby to the auditorium, every part of it was done exceptionally well. We had a great design team, and they were able to give the university a building that will be just as important to the region as the old one was. I think people will still be excited to go there 40 years from now.”

The opening public performance at the new Hancher Auditorium will feature Steve Martin and Martin Short on Saturday, September 24. The show is already sold out. With the new beautiful venue, Hancher can look forward to many more sold-out shows for decades to come. 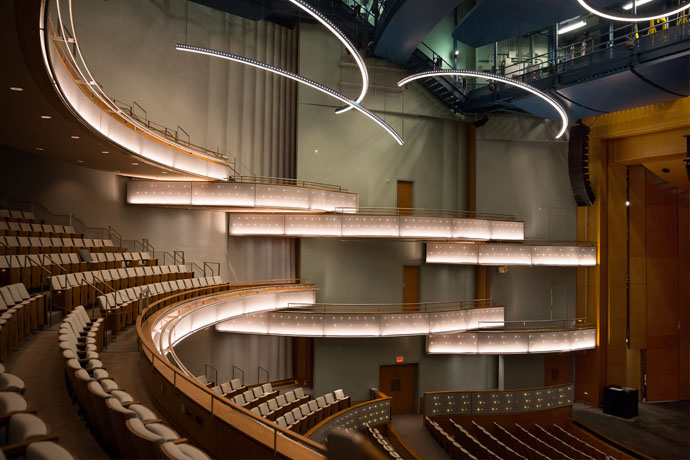 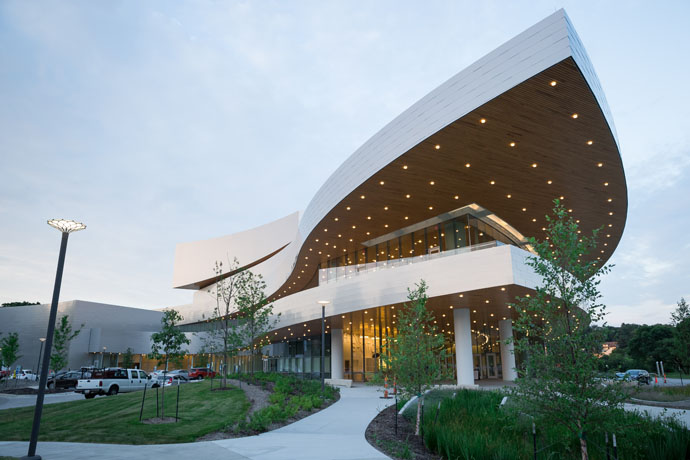 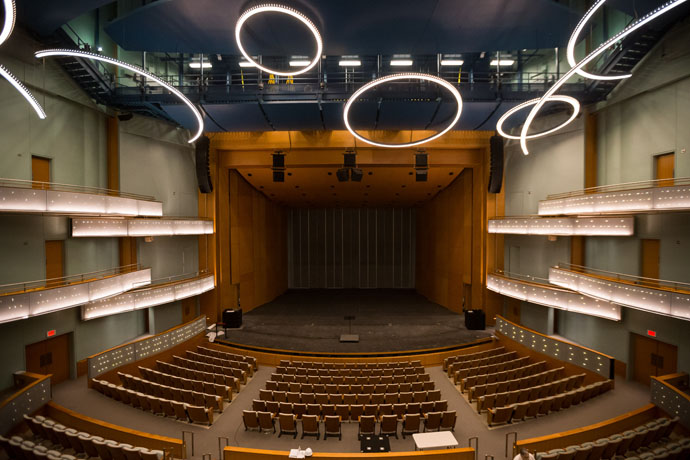