For the first time in more than a decade, crowds will soon pour into the theatre at 71 Wall Street, in Norwalk, Connecticut. And when they do, they’ll encounter a very different venue from what they may remember before the building closed in 2004. After an extensive renovation, the 102-year-old building has been revitalized from an abandoned relic into a versatile multipurpose performance space with a newfound purpose and a new name—the Wall Street Theater.

Theatre Projects was the renovation’s theatre consultant. As a company based in Norwalk, we’re proud to have worked to restore the historic theatre and play a part in enriching the city’s culture. Although we’ve worked for 60 years to create more than 1,500 projects in over 80 countries, working close to home to strengthen community bonds, maintain a connection to the past, and help boost the economy in our own backyard has made the Wall Street Theater renovation an extremely rewarding project for our team.

In the century since the theatre first opened its doors, the Wall Street Theater has gone by a lot of different names—The Regent, Norwalk Theater, The Marquee, The Globe Theater, The Roxy—and it has served many different functions—vaudevillian drama theatre, movie house, live music venue, dance club, community gathering place. With each iteration, the theatre’s civic importance and the public’s perception of its value have ebbed and flowed.

Now, after tireless efforts by the non-profit Wall Street Theater Company, dedicated citizens, and a dynamic project team that also included Design Development Architects, Jaffe Holden (AV and Acoustics), OLA Engineers (mechanical engineer), Szewczak Associates Consulting Engineers (structural engineer), and Morganti (construction manager), the building’s $9 million renovation is complete. With its grand re-opening, the theatre, which is listed on the National Register of Historic Places, aims to reposition itself as a vital component of Norwalk’s civic and cultural life.

With vastly more versatile, comfortable, and beautiful facilities, the revived Wall Street Theater aims to be not only a premier local destination for live entertainment, but also an incubator for cultural enrichment, arts education, and community engagement.

“I think this is going to be great for downtown Norwalk,” Steve Rust, project manager, theatre lighting designer, and Norwalk resident, said. “You have an unfilled niche in this area that a multipurpose venue like this meets. Sometimes, if a show is even an hour away, it can dissuade people from going, but with this venue right in the center of downtown, it makes getting out there so much easier.”

Theatre Projects worked with the design team to provide the Wall Street Theater Company with the versatility and flexibility to offer a range of programming—from light opera and amplified music to spoken word, banquets, and dramatic works. On the orchestra level, the old fixed seating was removed. The sloped floor was replaced with flat floor sections arranged in three large tiers. The stepped-down design accommodates standing crowds and can be arranged with loose seating, providing clear sightlines for seated guests.

To create a stronger connection between the audience and performers, Theatre Projects redesigned the room with side boxes extending the existing balcony toward the stage. The balcony was partially re-raked, its seating was replaced, and a new cross-aisle row was added. Combining the loose orchestra-level seating, balcony, and side boxes, the renovated theatre can accommodate 700 guests.

“It’s an amazing conversion,” John Runia, theatre designer, and Norwalk resident, said. “We’ve basically re-created the classical form of an early 1900s roadhouse from a totally gutted building—there was essentially nothing inside. Now they can do so many things and they have so much usability with rigging, lighting, and other equipment—all that from basically nothing.”

“It’s a small stage and a little more than a half-height stagehouse, so fitting everything in there wasn’t so easy,” Andrew Hagan, theatre equipment designer, said. “We managed to get a lot of infrastructure and a lot a of functionality into a very small footprint. It was a challenge…but it was successful.”

The stage itself was restored with a sprung floor and raised slightly to create better visibility and more headroom underneath. A new lift connects the orchestra floor to the stage and an elevator provides access to the basement level. The basement was reimagined with a series of new dressing rooms, restrooms, and green room—providing comfortable accommodation and accessibility for guest artists.

Because of the theatre’s historic importance, the renovation required a careful touch in order to create modern amenities and state-of-the-art theatre systems, while respecting the building’s history, style, and architecture.

Many steps were taken to preserve the building’s historic character, including preserving the original murals and art deco flourishes. Local artists were also called on to paint new murals. While maintaining the theatre’s history and character, the design team put in a great deal of effort to modernize the theatre with state-of-the-art technology. The theatre’s new performance lighting system consists entirely of LED lights, providing cost-effective, energy-efficient, and versatile lighting. The house lighting, which Theatre Projects also designed, is composed of 90% LED lights and 10% incandescent.

Outside of the main performance space, the lobby has been upgraded with an elegant new bar and a small secondary stage to accommodate smaller performances. Off to the sides of the lobby, there are two multipurpose rooms that face out from the storefront windows and will be used for conferences, meetings, receptions, performances, community gatherings, and as classroom space—helping Wall Street Theater Company meet its commitment to arts education.

The renovation of the theatre isn’t the only sign of progress and revitalization in the neighborhood. An adjacent building—a former bank—has caught the eye of Connecticut Public Broadcasting, who has submitted plans to turn the building into a digital media center. Because the Wall Street Theater and Connecticut Public Broadcasting have high hopes for future collaborations, Theatre Projects programmed the Wall Street Theater with a control area and the infrastructure to digitally link the two entities.

“It will be great for the entire neighborhood and the whole city,” Andrew said. “With more foot traffic in the area and people heading there for shows and community events, you have other local businesses benefitting from its presence—restaurants, bars, and cafes. Even small efforts toward cultural improvements can really have big impacts on their communities.”

April 1 marked the first performance in the renovated Wall Street Theater—Gilbert and Sullivan’s H.M.S Pinafore and Victor Herbert’s The Magic Knight by the Troupers Light Opera Company. The light opera put the newly opened theatre to the test, making full use of the new stagehouse with intricate sets and multiple scene changes, filling the stage with a cast of dozens, and seating a 30-person orchestra in front of the stage. The event marks the beginning of a month-long series of music, community, and theatre events intended to put the new theatre through its paces and introduce the facility to the public before its official grand opening, which is planned for early May. 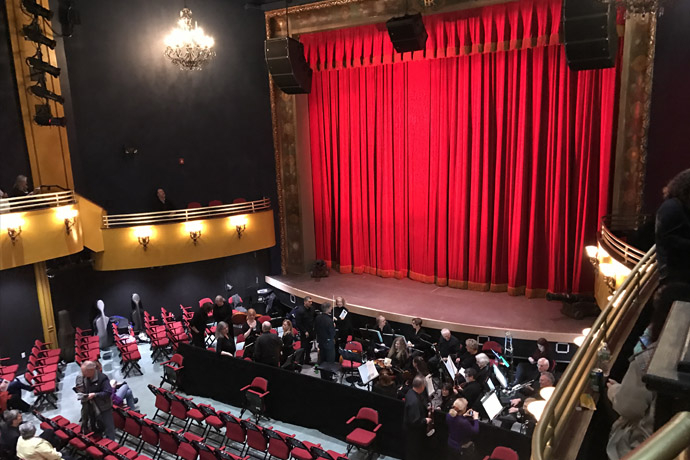 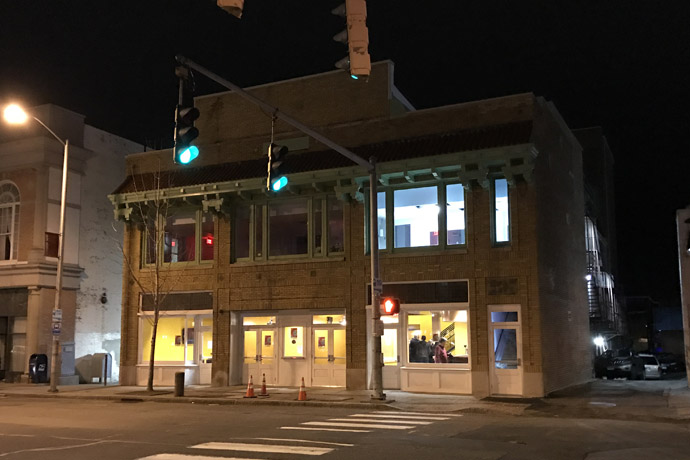 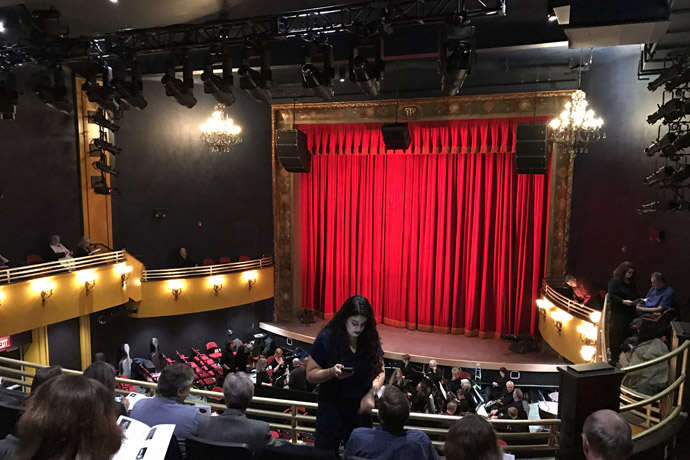