A beloved Los Angeles landmark, a treasured venue for community arts groups, and a quintessentially Californian institution, the John Anson Ford Amphitheatre will reopen this month following an extensive renovation by Theatre Projects, Levin & Associates Architects, Mia Lehrer + Associates (landscape architects), and McKay Conant Brook (acoustician). The renovation was so extensive that some are calling it not just a renovation, but a “rebirth.”

For more than 95 years, the 1,200-seat amphitheatre has been a favorite destination for community arts groups and local artists, but it wasn’t without its faults. With a stage tucked into the bottom of a sloping hillside, the venue was subject to rainwater run-off, cascades of rocks, and intermittent flooding. An uncovered stage left the venue directly exposed to the elements, which took a steady toll on the stage, seating, and equipment. A limited theatrical infrastructure included no real lighting positions, restricting the venue’s performance capability, and sparse support spaces prevented the booking of many popular touring acts. There was also a shortage of public areas, leaving visitors without suitable pre-show, intermission, or gathering areas.

With the goal of making the amphitheatre more welcoming to audiences, more versatile and robust for local arts groups, and more appealing for the larger touring acts that the Ford hoped to attract, Los Angeles County embarked on a top-to-bottom renovation.

The design team began reviving the historic theatre in 2014 with a renovation of the venue’s seating, including rearranging, removing, and replacing seats to create better sightlines, greater comfort, and more intimacy between the audience and performers.

The renovation continued over the next three years, mostly conducted in off-season months to avoid interfering with the Ford’s hectic performance schedule. One of the biggest challenges Theatre Projects faced was to replace the decades-old concrete stage with a resilient wood floor system that would be forgiving enough to handle dance and dramatic works, yet strong enough to host equipment-heavy touring acts—all while standing up to Southern California’s sun and rain. Theatre Projects designed a unique stage floor made from Ipe, a robust Brazilian hardwood, which sits on top of a newly poured, properly drained concrete subfloor and requires only typical maintenance. Not only is the new stage more forgiving, it’s also more accessible after the addition of reconfigurable stairs, allowing for a more direct connection to the audience.

Theatre Projects understands that a robust stage floor is a vital and often overlooked part of a successful community arts space. By attending to the performance aspects of the floor—something that normally might not be apparent for a performance installer or architect—we provided an invaluable project resource, and designed a safer platform that gives the Ford programming flexibility.

Behind the new stage, the Ford’s characteristic hillside was reinforced with a new retaining wall to help prevent flooding. Behind the audience, the existing back wall was removed, and a new, taller, and more acoustically absorptive wall was built. In addition to providing a much-needed front of house lighting position, the wall also improves the acoustic quality of the venue and helps contain sound within the amphitheatre. Most importantly, it prevents noise from bleeding into the venue from the nearby 101 Freeway and the 18,000-seat Hollywood Bowl.

In an effort to provide the best lighting possible, Theatre Projects designed two 50-foot side lighting towers, which were erected on the hillside, providing versatile rigging positions, and two 40-foot front of house towers, providing proper angled lighting for the many dance productions the Ford hosts. With the new towers, performance lighting no longer has to be mounted directly on the stage buildings, where they would occasionally glare out onto the audience.

When the lighting towers were initially proposed, there was reticence to installing what some thought would be intrusive elements, incongruous with the style of the 100-year-old venue. But with Theatre Projects’ track record, expertise, and guidance, it was demonstrated that the towers were not only unobtrusive, but they also would open many new opportunities for sound and lighting.

Improvements to the Ford’s support spaces include new dressing rooms, greatly expanded storage areas, a new loading dock with direct access to the dressing rooms and stage, a new terrace/picnic area, and a concessions bar with a full kitchen. With the additions, larger audiences can arrive early, take in the serene setting, enjoy a meal at intermission, or take part in post-show events.

With the completion of the $72 million renovation, the Ford Amphitheatre has reestablished itself as a paragon of community performance venues and an institution that truly celebrates and supports local artists, earning itself an unmatched place in the hearts of Angelinos. With more accommodating, comfortable, and robust facilities, and greatly expanded creative flexibility, the amphitheatre looks forward to a new era balancing local programming with a schedule of popular touring acts. With a celebrated history already behind it, the Ford Amphitheatre now confidently looks ahead to an equally extraordinary future.

Plans for future renovation phases include a new three-level parking structure, 299-seat indoor theatre, box office, museum-gallery, and hiking trail, which are due to be complete by 2020.

The venue now known as the Ford Amphitheatre opened in 1920, designed by Bernard Maybeck of the “arts & crafts” architectural movement, and for nearly 40 years hosted only one show—the 12-part biblical epic “Pilgrimage Play.” The Pilgrimage Theatre, as is was called at the time, was destroyed by a brush fire in 1929, redesigned by William Lee Woollett, and reopened in 1932. For the next 25 years, the venue continued hosting only the one show, save for several years in the 1940s when it was converted to dormitories to house servicemen during World War II. The theatre and the “Pilgrimage Play” remained popular until 1964 when a lawsuit alleging a conflict between the show’s religious content and state ownership of the facility forced a change in programming. The county continued to use the theatre as a music and dance venue, but attendance fell and the structure deteriorated. The venue remained in poor condition until 1976 when a Los Angeles County supervisor and avid arts booster obtained funding for capital improvements and the 1,200-seat amphitheatre was renovated and renamed in his honor. That man’s name: John Anson Ford. 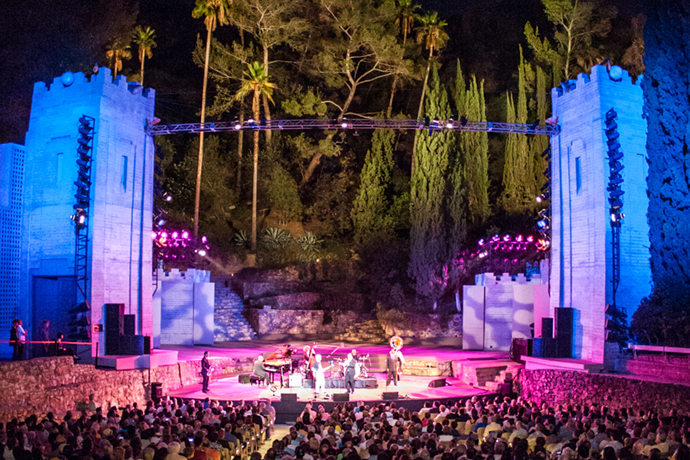 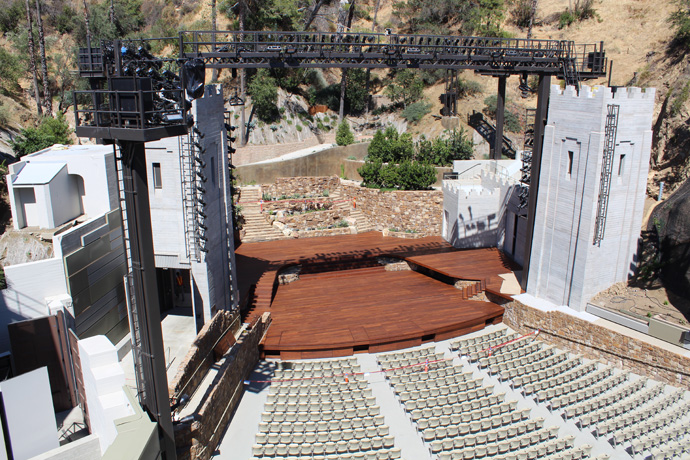