The University of Massachusetts Boston held a ribbon-cutting ceremony on Monday, October 17, ushering in a new era, and welcoming the public to tour the new arts and humanities building know as University Hall. Set on the shores of Boston Harbor, the multi-disciplinary 191,000-square-foot facility was a collaboration between Theatre Projects and Wilson Architects with acoustic work provided by Acentech. Theatre Projects programed and designed the building’s performing arts and support spaces and provided concept design, theatre planning, and theatre equipment design and specification for the $131 million project, which is the second building to open under UMass Boston’s 25-year Campus Master Plan.

In 2009 UMass Boston released their master plan, which laid out a series of objectives to transform the 1970s campus into a more sustainable, efficient, and attractive environment. Most prominent among those was the need to foster a more student-centered campus and engage in new ways with the surrounding community.

That vision moved one step closer toward realization with the phased opening of the new University Hall which features more than 25 classrooms, visual arts studios, laboratories, offices, and versatile, dynamic performing arts spaces including a recital hall and flexible studio theatre.

On University Hall’s first floor, an intimate, sunlit, and acoustically adaptable recital hall offers a picturesque setting for choral and acoustic performances as well as a versatile space for a variety of university and community events. At the room’s north end, a short stage curves out toward the audience. Behind the stage, a large glass wall lets in sunlight, illuminating the room. Warm wood finishes on the seats, walls, and ceiling create an inviting atmosphere and a modest seat count of 175 lends to the venue’s intimacy and fosters dynamic and impactful musical performances. Flexibility of the room’s tone was achieved through installation of acoustic reflectors on the ceiling, articulated acoustic paneling, and acoustic banners and travelers along the walls. In addition to the room’s inviting nature and acoustic flexibility, the venue’s state-of-the-art lighting and audio systems make it an exceptional performance environment.

As a learning environment, the studio theatre’s versatility accommodates every theatrical discipline a performing arts student might study. Young actors have an intimate venue to perform and practice in comfort; production designers have an adaptable canvas and a space that allows for multiple configurations, challenging them to push their designs beyond the proscenium; and students of lighting and sound design can get their footing with professional-quality equipment and versatile rigging systems. Whether students are working to become writers, production managers, directors, costume designers or make-up artists, the studio theatre and its support spaces give them the space and resources they need to fulfill their ambitions.

UMass Boston counts more than 600 veterans among its student population and the university has an ongoing initiative to help provide America’s veterans with educational opportunities in a welcoming, accessible environment. Considering the injuries some veterans have suffered, all UMass Boston buildings are built to the highest standard of accessibility and University Hall is no exception. The flexible studio theatre was designed so that wheelchairs can access the stage not only in typically accessible configurations, but also while in arena configuration.

In addition to being highly accessible, University Hall is also highly sustainable. UMass Boston is aiming for LEED Silver Certification. Both the recital hall and studio theatre feature all-LED performance lighting—one of the many innovative technologies that contribute to their application.

Some of the best views of Boston Harbor that University Hall has to offer can be seen from the dance studio on the building’s fourth floor. The studio features sprung floors, a pipe grid, walk-along curtains, and an immense glass wall overlooking the water. In addition to the dance studio, recital hall, and studio theatre, University Hall offers a rich array of support spaces, including a 500-seat general purpose auditorium, rehearsal rooms, acting studio, music studio, practice rooms, scene shop, costume shop, dressing rooms, and green room. “The new spaces are perfect for UMass Boston,” project manager, David H. Rosenburg, said. “They’re the ideal size for the university, and they will make students feel right at home.”

Additionally, David said, the new location will be able to draw in members of the community like the university’s previous performance spaces could not. “A new, easily accessible, and highly visible spot like this will be a beacon to the public—not just the students,” he said. With a grand four-story lobby, café, and a beautiful waterside location, the multi-disciplinary facility is perfectly suited to help the university with its goals of greater community engagement and diverse, student-centered educational opportunities. 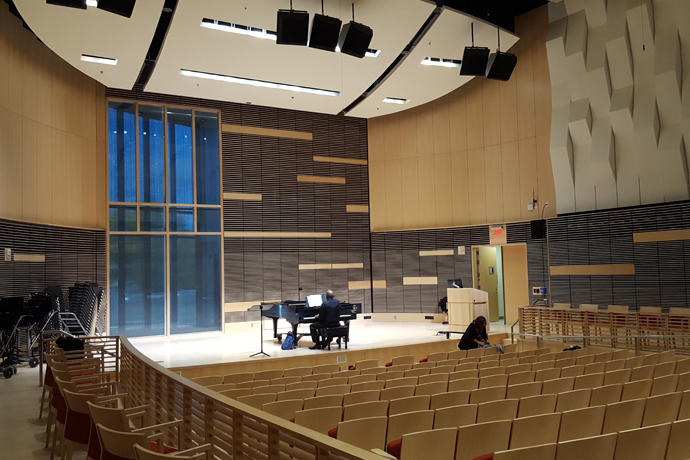 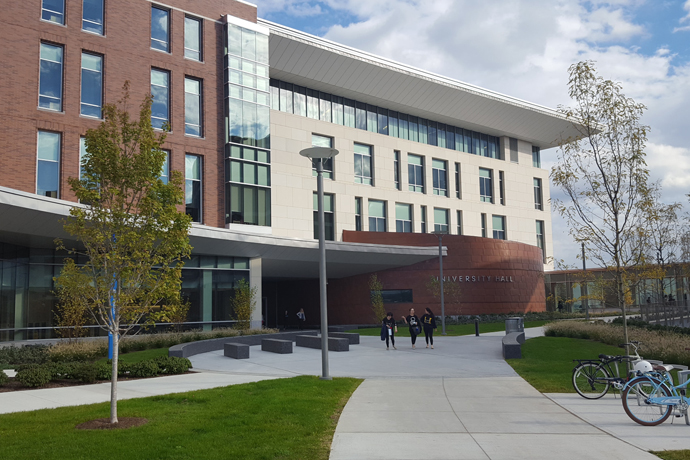 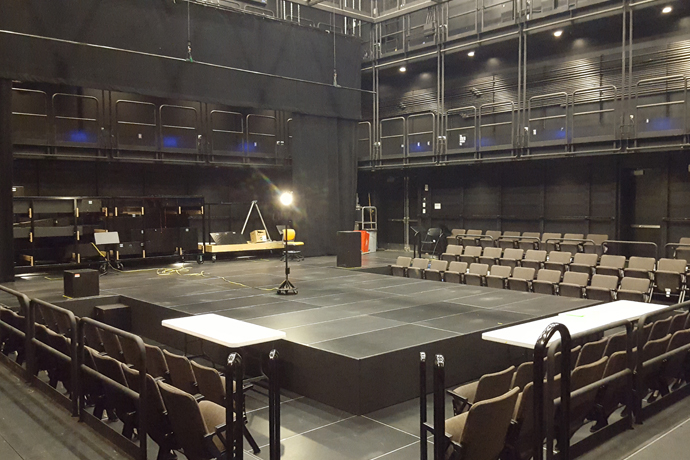